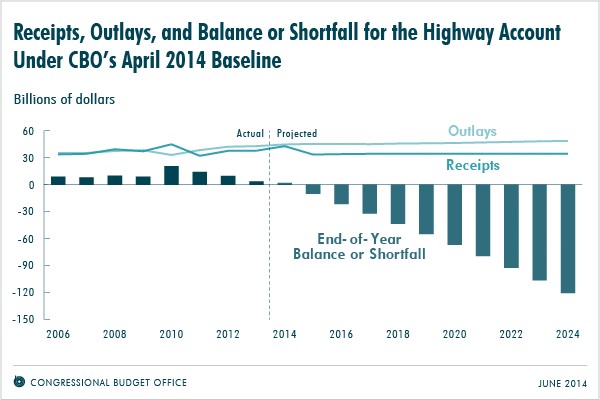 Every four years, the American Society of Civil Engineers (ASCE) grades the condition of U.S. infrastructure on a scale of A through F. Since 1998, America’s infrastructure has earned persistent D averages. Underinvestment is a much-studied topic. EDR Group’s recent report on this issue to ASCE "Failure to Act: Closing the Infrastructure Investment Gap for America’s Economic Future” found that the most significant investment gap across all types of infrastructure is in the transportation sector, where $1 trillion in additional investment is needed over the next ten years.

The U.S. funds federal spending on highway and transit projects through a variety of user fees that pay into the Highway Trust Fund (HTF). Fuel taxes contribute the largest share of revenues by far. In FY 2014 they constituted 87% of the HTF’s tax revenues. However, over the past 10 years spending from the HTF began exceeding revenues, a condition forecast to worsen over time (see figure at left, source: Congressional Budget Office). Increased fuel efficiency of gas-powered vehicles and popularity of alternative fuel vehicles is key driver of this trend—one that also affects state transportation funds due to their significant reliance on state fuel taxes.

Starting in 2008, Congress addressed the HTF funding problem by transferring money from elsewhere, primarily the General Fund of the U.S. Treasury. The most recent surface transportation authorization bill, the FAST Act, continued this approach, with 25% of trust fund deposits over a five-year period to come from general tax revenue rather than broad-based user fees.

What’s going on at the federal level with the Highway Trust Fund is just one piece of a much broader conversation about how to fund transportation investments and an increasingly focused legislative, political, and research exploration of creative or alternative financing mechanisms.

The November 2016 elections saw residents in a nearly half of all U.S. states voting on a large range of transportation ballot measures and initiatives with over $250 billion at stake, according to the Eno Center of Transportation. Some passed, some did not, but all grappled with the question: who should pay for transportation infrastructure and services and how can revenue generation mechanisms be structured to support sustained long-term investment in a manner that is both efficient and fair?

EDR Group is currently involved in a number of federal and state efforts that address these questions.

In one project, EDR Group is part of a team funded by the National Cooperative Highway Research Program to develop guidance on the Use of Value Capture to Fund Transportation. Value capture (sometimes referred to as value sharing) is the idea that governments may be able to share some of the commercial value created by the access provided by public infrastructure investment, and use this “captured value” to help finance transportation system investments. The project considers a variety of mechanisms including development impact fees; land value-based fees; betterment levies and special assessment fees. The research will help State DOTs assess whether value is indeed being created by transportation investments and then assess a range of value capture mechanisms based on their efficiency, equity, revenue potential, and sustainability. Key questions being answered are: how can value created by public infrastructure investments be shared; what are the legal means and practical methods for sharing value; who benefits and who pays when value capture is implemented, and how has value capture been implemented in the past. A guidebook for policymakers illustrated with case studies and real-world examples will be produced by this project.

In another project, EDR Group is working with the RUC West, a consortium of 14 western states investigation the feasibility of implementing a Road User Charge (RUC) funding system. There are several on-going projects being sponsored by RUC West, including pilot studies, to assess the financial impacts of moving from a fuel-based tax to a mileage-based fee system. EDR Group assessed “revenue neutral” mileage-based road user fees that would be required to replace current gas tax revenues. A key equity concern for the Western states is whether there would be disproportionate impacts on rural drivers due to the greater distances involved in their daily travel. EDR Group’s analysis showed that due to the combination of travel characteristics, mileage driven, and current vehicle fuel consumption characteristics, rural drivers would actually pay less in terms of total dollars spent each year under a mileage-based fee system than with the current fuel-based tax system.

Going forward, innovative finance will continue to be a key issue in the transportation world. But as we fundamentally change the ways that we pay for our transportation investments, questions about the fairness, sustainability and the ability of these new mechanisms to meet our future investment requirements will need to be addressed. Economic principles and methods can provide the insight required to help make these changes. And fostering communications between policymakers and the public will be essential to gain the acceptance needed to make changes in how we fund transportation infrastructure investments in the future.