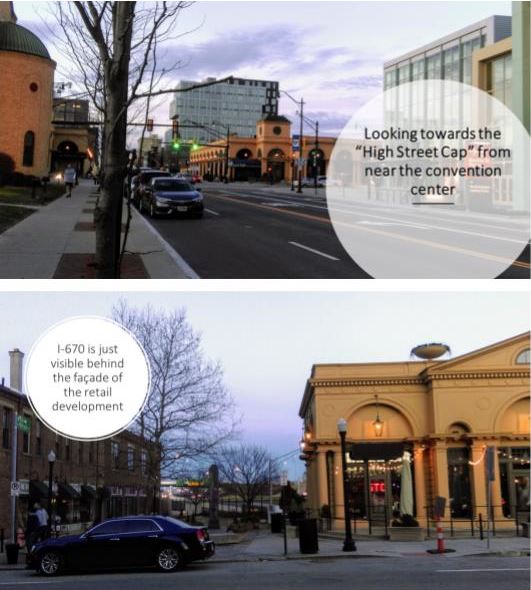 For this project, EDR Group, working as part of a team led by Texas A&M Transportation Institute (TTI), documented the implementation of a variety of value capture methods, including key success factors and economic development outcomes.

One of the case examples I researched is of joint development through an air rights lease on a land cap over I-670 in Columbus, OH. The so called “High Street Cap” or “Cap at Union Station” is a retail development built using the air rights above the interstate that formerly separated downtown Columbus from the Short North neighbourhood. The project involved an agreement between the City of Columbus and a developer in which the developer leases the air rights platform from the city for $1 per year and 10 percent of ongoing profits from the leased retail space. The project occurred as part of a broader effort to widen I-670. The City, developer, and Ohio DOT all contributed to the cost of the project. I had the opportunity to see the highway cap up close in person not too long ago:

This case demonstrates how less traditional thinking about the role of a transportation agency and its assets, and the breaking down of “siloes” between public and private, city and state, and building partnerships, can yield new economic development opportunities. If you’d like to learn more, take a look a the published guidance.