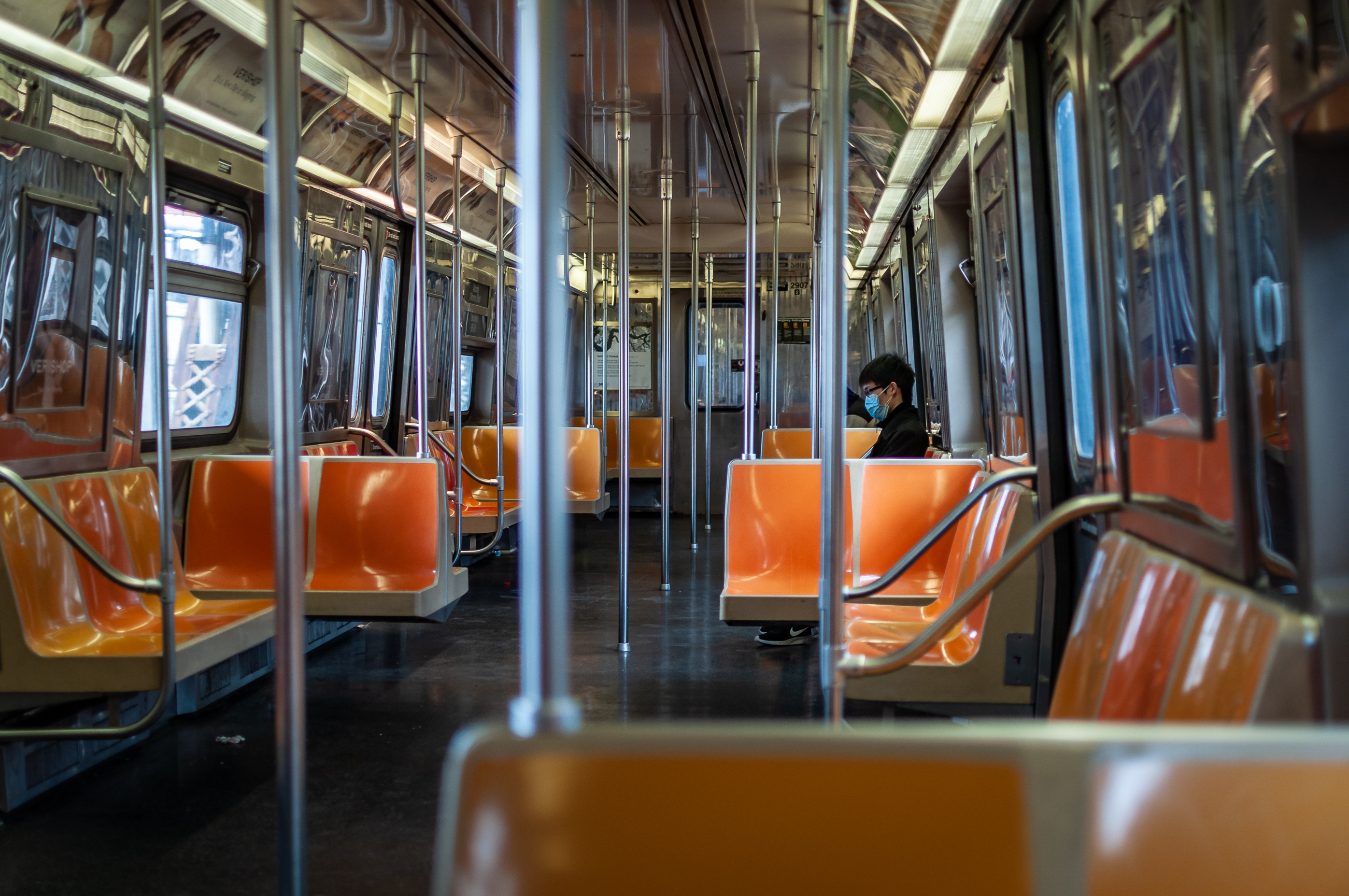 EBP analysts identified this “Catch-22” in our Insights article on planning for a post-pandemic era: transit users continue to demand high quality-of-service just as transit agencies are seeing their already-limited revenue sources evaporate. As COVID cases spike and transit ridership remains low, planners must ask: what are the consequences, and can they be mitigated?

Transit agencies across the country face both short-term and long-term challenges to ridership levels. Many unemployed people no longer have a commute and huge numbers of people are conducting their daily lives remotely. As EBP’s Cecilia Viggiano wrote for our blog, travelers with access to telecommuting, e-commerce, telehealth, and distance learning are staying home. Despite evidence that public transportation may not be so dangerous, the risk of coronavirus transmission has especially deterred former transit commuters. Furthermore, there is little evidence that the riders will be back anytime soon. Attitudes toward public health and social distancing will change slowly at best. Riders will almost certainly favor more space and less crowded conditions on buses and trains and in stations for the foreseeable future.

As shown in the chart below, New York City’s transit ridership dropped precipitously in March and April 2020. Over the summer, ridership recovered haltingly, peaking at less than half its usual level in September. As the pandemic’s second wave set in during the fall, ridership continued to decline slowly but steadily. According to APTA’s Ridership Trends Dashboard, a similar pattern has played out for transit agencies across the country. The riders are gone, and it’s not obvious if or when they’ll be back.

As straphangers stay home, fare revenue has collapsed. In May 2020, our analysis for APTA anticipated that U.S. transit agencies would face a funding shortfall of $23.8 billion between the second quarter of 2020 and the end of 2021 absent federal assistance, with ongoing depressed ridership translating to quarterly transit revenue gaps of $4-8 billion through the end of 2021. More recently, TransitCenter estimated that the public transit industry lost between $26 billion and $40 billion in revenue in 2020 as a result of the pandemic.

Making the problem worse, cities and states are facing their own financial crises, jeopardizing essential subsidies for public transit systems. In March, the $2 trillion CARES Act helped transit agencies keep the lights on during a catastrophic 2020. As of this writing, the federal government’s recent stimulus has set aside $14 billion for public transportation funding – a critical lifeline that nonetheless will patch only a portion of the enormous holes in agencies’ operating budgets. Again, the paradox is at work. Even as revenue falls, transit agencies are also spending more to preserve safe conditions. The MTA, for example, spent nearly $400 million through November 2020 disinfecting train cars, wiping down stations, and testing workers for COVID-19.

While transit agencies were awaiting federal action in December, many laid out potential “doomsday service plans” for 2021 as they sought to balance their budgets without aid from Washington. While the stimulus will help Americans avoid the worst of these outcomes, this wave of service cut proposals are an ominous portent for the future. For instance, the Washington (DC) Metropolitan Area Transit Authority (WMATA) proposed severe service cuts that include all weekend and late-night Metro rail service and closure of 19 of the system’s 91 stations. In Boston, the Massachusetts Bay Transportation Authority (MBTA) warned it may need to end weekend service on the commuter rail and shut down the city’s ferries indefinitely. In Atlanta, 70 of the city’s 110 bus routes have already been suspended, a move that could become permanent without more secure funding. Finally, in New York City, the MTA – facing a $6.1 billion deficit for 2021 – released a plan that could slash subway service by 40 percent and cut commuter rail service in half. These proposed cuts are in addition to overnight subway service, which has been suspended since May. Federal aid will only go so far in preventing these disasters for more equitable mobility. While transit providers in many of these larger cities rely more heavily on fare revenue than smaller cities and rural areas, they actually receive a disproportionately small share of federal support relative to their much greater share of the nation’s transit ridership.

If we have so far avoided the worst service cuts in public transportation, the possibilities for recovery appear limited. Despite growth in national transit ridership from April to September, numbers have declined again for the past several months. While vaccination and herd immunity promise a greater degree of normality in the future, long-term trends in telecommuting make a full return to pre-pandemic ridership levels unlikely. In a vicious cycle, deteriorating transit service would deter riders from returning to transit. Furthermore, increases in driving will worsen traffic congestion, which will contribute to poor on-time performance and reliability for bus systems in many places, potentially making them less attractive still.

As transit agencies adjust to potentially reductions in ridership for the long-term, the consequences of funding shortfalls will become obvious. Operationally, agencies will be forced to sacrifice either coverage on the one hand or convenience and high ridership on the other. If they focus on coverage, it will be difficult for them to operate cost-effectively while serving ridership far below historical levels. If they focus on ridership, it will be difficult for them to serve many of the riders most dependent on their service.

Furthermore, in a budget crunch, capital investments are likely to take a backseat to more immediate needs for operations, creating additional obstacles for beleaguered projects like the Gateway Program, later phases of the Second Avenue Subway, and many smaller investments across the country. As we’ve noted in our Failure to Act study series for the American Society of Civil Engineers (ASCE), deferred maintenance and capital investments will lead to a host of woes, some with lasting long-term impacts on transit systems: aging assets, increased passenger delays, more frequent service interruptions, higher operating costs for aging vehicles, and higher debt to maintain existing service. These impacts will ultimately ripple through the economy and reduce household income; in May, we anticipated that reduced transit capital spending across the country would result in the loss of 37,000 construction jobs in 2020 alone.

In addition to the direct impacts on transit systems themselves, reduced and hobbled transit will affect the long-term economic prospects for major cities like New York. The relationship between transit and economic activity in New York City prior to the pandemic is well documented by various studies. For example, the Manhattan Institute traced the epic growth in subway ridership relative to workforce and population through 2016 (see graphic), finding subway ridership greatly exceeded growth in workers and commuting – a clear indicator of the effect of transit service on overall economic activity and the dependence of those activities on transit.

We now face the prospect in reverse – a profoundly hobbled transit system will almost certainly have enormous consequences for New York City’s economic future. The first key question is how quickly subway service can recover post-pandemic. Absent a major infusion of federal funding, transit’s comeback will be painstakingly slow. While an equally slow economic bounce back may buy some time for transit systems to ramp back up, a slow return to transit “normalcy” is likely to undermine the economic recoveries of big cities, where transit has been the lifeblood of the economy, moving office workers, shoppers, and tourists.

The second and perhaps more fundamental question is what a post-pandemic economic recovery will look like and how this will reshape the need for newly “right-sized” transit systems. Many changes seem likely to be long-term – the only question is how much things will depart from pre-pandemic patterns. For example, the concentration of office employment in the core CBD will likely not return to pre-COVID levels. Recent research is already pointing to a new labor market structure with many fewer retail employees, for example, and with a potentially unprecedented loss of restaurant and other service jobs. The pandemic is also demonstrating that many types of service jobs can be replaced by technology and less formal business structures. Gyms, movie theaters, and spas are not likely to return in the same numbers, while the demand for health care workers will almost certainly increase, not only due to the after-effects of the pandemic but as a result of normal demographic swings toward an older population.

Lack of good transit will also lead to increased pressure on the livelihoods of lower income workers. Transit is especially important for essential workers, with about 2.8 million Americans employed in essential industries like health care, grocery stores and pharmacies using public transit to get to work in 2018, according to TransitCenter.

While there’s no easy solution to these generational challenges for cities like New York, the transit industry has the tools to advocate for funding and to make tough decisions in the context of limited funding for investments. Transit advocates must be prepared to demonstrate the economic contribution of public transportation and the role of transit in multimodal access to jobs; pursue value capture finance for transit projects; and use right-sizing principals to make the most of limited funds. Finally, in an uncertain world economic scenario planning can help agencies anticipate and adjust for changes in society, technology, climate, and economics. We cannot predict the future, but in thinking intelligently about the present, we help our clients build the insight necessary to withstand the uncertainties of tomorrow.

This post is the second in a series on the impacts of COVID-19 on major American cities like New York. The first post in the series, on food insecurity, is available here.